We’ve been in pilot programs and betas for a while — and now we’re ready to share what we’ve built with the world.

Web Development is one of the last holdouts.

There are a few quirks with the way modern web development works right now. One of the most perplexing ones is this: while we are the biggest proponents for “migrating to the cloud” — getting retail brands, farmers, fitness studios, sales organizations, travel, and even car dealerships to move their workloads to the cloud — we are some of the last hold-outs, still working locally on hard drives. Most developers still download and install development tools directly to their local Mac or Windows machines and perform all of their development work on their physical computer.

So, what’s the deal? Why haven’t developers moved en masse to the cloud like most other industries and disciplines?

Well, most of the big boys (the large product companies with those big ol’ stock prices) have spent a bunch of time and money to move their own development workload to cloud dev boxes. They have specialized cloud-based dev environments tailored specifically to their needs, running on their own gimungous infrastructures. Most devs simply don’t have the means to build their own system like this.

We need to move web development to the Cloud.

Web Developers have always looked to industry leaders for inspiration and guidance on tools, processes, and workflows — with good reason. However, the more the big boys invest in their internal infrastructure and dev environments, the further and further the average dev is left behind. We needed a way to afford every developer the means to work in the Cloud and remove all the roadblocks and hurdles.

Devcubbies is a team of dedicated industry professionals from a variety of backgrounds who all saw and experienced the same problem. So in the great American way, we quit our jobs and pulled in our own savings to solve the problem — for ourselves, and for everyone else.

There are several key issues we need to solve to be Cloud Native and make it worth the transition.

We dove in directly, identifying and tackling the very specific problems that were keeping true cloud coding just out of most developers’ reach. And there were some doozies. Each one presented us with unique and diverse challenges, but that’s what we’re here for. We concepted, collabed, tested, fixed, tested some more — and we’re very happy with the outcome.

Cloud-based Dev Environments don’t have to be expensive.

It’s true — cloud coding is normally prohibitively expensive, but it doesn’t need to be!

Once you buy a $2000 laptop and all the various dongles and adapters you’ll need, it’s a really hard sell to then “purchase” another computer in the cloud with a large monthly fee attached to it. We get that. Here’s the thing, though: most cloud providers for DIY cloud dev setups charge you hourly for a box you’ll use maybe 40 hours a week. That’s paying for an average of 730 hours a month when you’ll only be using it for maybe 170 of those. That means you use less than 25% of what you pay for.

Unsurprisingly, this didn’t sit well with us. So, we built a platform that (just like your laptop) sleeps when you’re not using it. It may sound simple, but trust us when we say this was the hardest and most important thing for us to solve in Devcubbies. And we did it.

A new toolset doesn’t have to mean changing your entire workflow and process.

We’re not claiming to be the first on the block. There are some really robust and awesome cloud development environment platforms out there — but they’re not for everyone. Generally, new systems and tools means upending existing processes and rebuilding the way your workload flows through the queue; more steps, more hassle.

We designed the Devcubbies system so that it’s completely out of the way. You have your existing tech stack, process, and workflow — you should keep them. While we have likely experienced similar challenges, aha-moments, and setbacks that you or your team has, we’re not pretending to know the best way for you specifically to get things done. We would never tell you to use a hammer with a screw, so why would we force you in to a specific cloud IDE, tech stack, or process? Seriously, you can even spin up a COBOL and Bugzilla on Devcubbies (if you really want to).

Enough reading. Get in the box.

Troll through devcubbies.com to get the specifics you need, watch our Getting Started videos on YouTube, and when you’re ready, just get started. You can spin up your very own cloud native development environment with Devcubbies, in minutes. Today. Or on Monday, if you’re one of those people.

Jim is the CEO of Devcubbies. 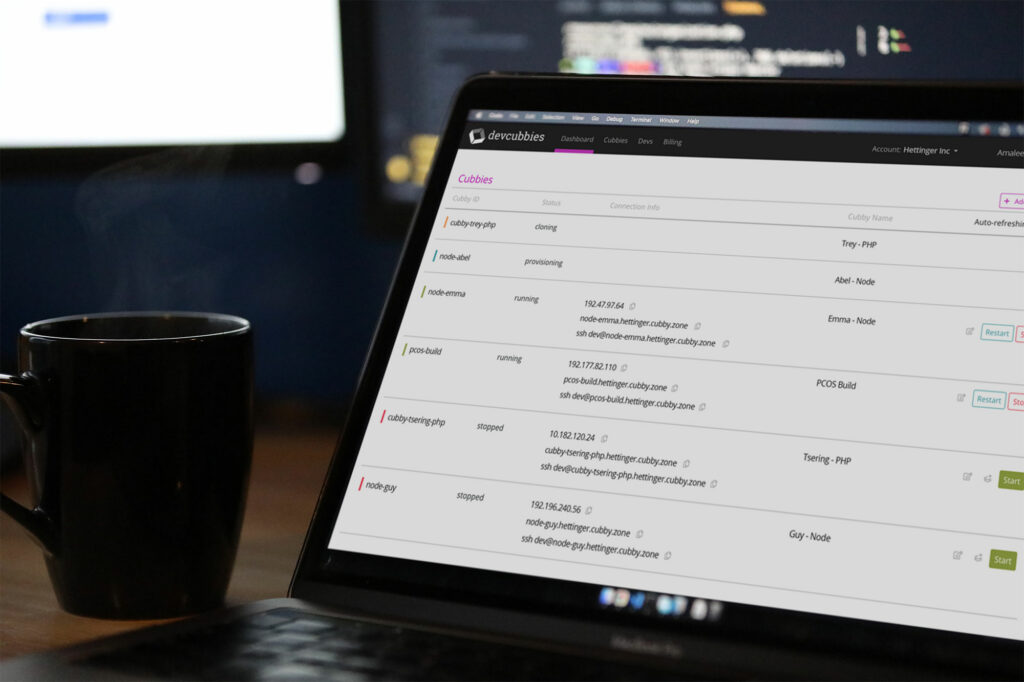 Get in the box.

Get in the box.